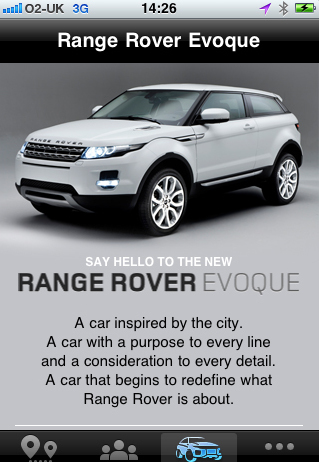 The ‘Pulse of the City’ app lets users create a unique and stunning data visualisation of their journeys across ten cities worldwide.

Land Rover today announced the launch of 'Pulse of the City', an iPhone app that anticipates the launch of the new Range Rover Evoque.  The 'Pulse of the City' app lets users create a unique and stunning data visualisation of their journeys across ten cities worldwide and can be downloaded at http://itunes.apple.com/uk/app/range-rover-pulse-of-the-city/id398471586?mt­=8.

In a world first, the 'Pulse of the City' app, launches on iPhone (android available from mid November) and uses GPS tracking to record the collective movements of people within the ten cities. Users will be sent a graphical representation of their journey which they can display on the helloevoque.com website.

Users will be invited to join 40+ 'City Shapers' including influencers Daisy Lowe, Henry Holland, Georgina Chapman, George Lamb, Jessica Schwarz, Josh Rubin and Dylan Jones to download the app for free. City Shapers will be able to add comments about their favourite places, hot spots and journeys, creating a real time, evolving pulse of each city.

As the 'Pulse of the City' grows, Range Rover will be asking its 'City Shapers' and users of the app about their connection to their city.   Questions including 'What inspires you about your city?' and 'What are people talking about in your city today? will be posed each month, with the information from each city gathered to build a portrait of each urban landscape.    City Shaper journeys can already be viewed at www.helloevoque.com.

The 'Pulse of the City' app uses the new IOS4+ operating system's ability to run background applications, thereby allowing users to start the app and leave it running whilst using the phone to take calls or browse the web. It uses the enhanced GPS capabilities of the new OS to track each journey more accurately, making the final visualisation a true reflection of a user's movement.  The app will let users come back to saved journeys, pause the journey they are viewing and then share their journey via Facebook, Twitter and e-mail.

The app, launched in conjunction with the website www.helloevoque.com, is inspired by the new Range Rover Evoque and the cities that in turn inspired its design.    The app can be downloaded at http://itunes.apple.com/uk/app/range-rover-pulse-of-the-city/id398471586?mt=8

The Range Rover Evoque is a new smaller, more eco friendly Range Rover which will appeal especially to a younger, urban minded driver.  Its design is inspired by city architecture and is being launched in key cities around the world.

The City Shapers taking part in the 'Pulse of the City' are influential in their cities and have interesting points of view that people listen to.  They come from different aspects of culture that make up the varied nature of their cities, from arts, the creative industry, film, music, fashion, media - anywhere where they've made their own mark, have an interesting point of view and would appreciate the design thought that has gone in to producing the new Range Rover car.

The 'Pulse of the City' app will be available for android from mid November 2010.