Land Rover BAR win the final regatta in Japan to take the overall Louis Vuitton America’s Cup World Series title, putting them in a commanding position going into the America’s Cup Final next year in Bermuda.

Land Rover BAR fought hard for their victory and beat closest rivals and the current Defender, ORACLE TEAM USA in a dramatic and intense final race this weekend in Fukuoka, Japan.

Saturday’s strong sailing meant that the team headed into the final day in a commanding position. After a long and tense first race on Super Sunday, Land Rover BAR fought hard against Oracle Team USA as they sailed a very aggressive race showing Land Rover BAR no mercy and leaving the regatta wide open. The team kept supporters on their toes as they broke the line early in race two, with Emirates Team New Zealand and Oracle Team USA clear leaders at the start gun. A stunning recovery on the first lap saw them back into the pack, and with an incredible final leg pass of the Americans, Land Rover BAR sealed the World Series win. Securing third place in the final race meant the full champagne moment for Ben Ainslie and crew winning the Fukuoka regatta and the Louis Vuitton America’s Cup World Series.

Land Rover BAR will enter the America’s Cup Qualifiers, two points clear, giving them an early advantage for the first set of round-robin races starting on 26 May.

Two and a half years ago we had absolutely nothing, so what we have achieved in building the team, the infrastructure, and this performance in the World Series is something we should all be incredibly proud of - but at the same time it’s just one step in our journey to the America’s Cup. Our objective was to get the two bonus points and we’ve got that, and now the focus is clearly on the race boat and the performance next summer in Bermuda.

I am absolutely delighted by how things have gone, but at the same time I know our team and how focused they are on the America’s Cup. We will be straight into training in Bermuda and getting best prepared for the America’s Cup to try and bring it home after a 167 years of hurt.

It’s a fantastic result for the team and we are very proud to have been with them on this journey so far – taking this World Series win is such a huge achievement.

The next steps are still to come as the design team and our Land Rover engineers finalise the race boat codenamed R1 which will be launched early next year. It’s an extremely exciting and intense project and the countdown is now on for us to make our boat a winner in Bermuda.

The 35th Louis Vuitton America’s Cup, hosted in Bermuda, starts on Friday 26 May and continues until the final starting on Saturday 17 June.

The company employs almost 38,000 people globally and supports around 275,000 more through our dealerships, suppliers and local businesses. Manufacturing is centred in the UK, with additional plants in China, Brazil and India.

At Jaguar Land Rover we are driven by a desire to create class-leading products that deliver great customer experiences.  The largest investor in R&D in the UK manufacturing sector, we have invested £12 billion in the last five years and in the current year alone will spend over £3 billion on new product creation and capital expenditure. Last year Jaguar Land Rover sold 487,065 vehicles in 160 countries, with more than 80% of our vehicles produced in the UK being sold abroad.

Ben Ainslie Racing (BAR) was launched on June 10th 2014 in the presence of Her Royal Highness The Duchess of Cambridge. The team was conceived by four times Olympic gold medalist and 34th America's Cup winner, Sir Ben Ainslie, with the long-term aim of challenging for Britain and bringing the America's Cup back home to where it all began in 1851. Ben has developed and will lead a British entry capable of winning the prestigious trophy, something Britain has so far never managed to achieve.

Portsmouth will host a second Louis Vuitton America's Cup World Series event on 21st-24th July 2016. Almost a quarter of a million spectators enjoyed the action in Portsmouth in 2015, with 25,000 of them taking to the water - more are expected to come back in 2016 to watch the racing and cheer for the home team. 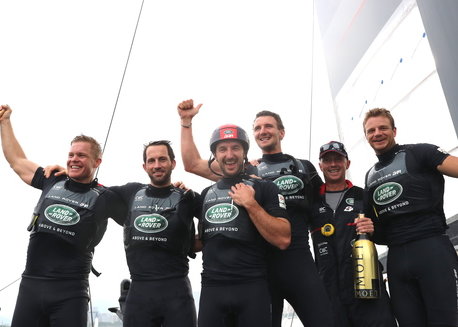 Land Rover BAR win the final regatta in Japan to take the overall Louis Vuitton America’s Cup World Series title, putting them in a commanding position going into the America’s Cup Final next year in Bermuda.