The exclusively designed Range Rover Evoque Special Edition is the result of a collaboration between Land Rover Design, led by Gerry McGovern with Victoria Beckham, winner of the coveted Designer Brand of the Year award at the 2011 British Fashion Awards.

Victoria was appointed Creative Design Executive in July 2010 and has worked with the Land Rover design team under the direction of Design Director Gerry McGovern over the past 18 months to create the Special Edition.

Gerry McGovern, Director of Design, Land Rover explains, "The design of the Range Rover Evoque has truly captured the hearts of customers worldwide. Working with Victoria, the intention was not to change the fundamental architecture and award winning design of the Range Rover Evoque. We wanted to create a Special Edition that extends its character in a new direction through understated, restrained color and detail changes."

"Both Land Rover and Victoria Beckham are British luxury brands with credibility and global appeal, this dual 'Britishness' makes the collaboration even more exciting especially when considering the huge audience for bespoke products around the world, particularly in China, Russia and Brazil where Land Rover is growing."

Victoria Beckham said, "I am very excited to be working with Land Rover as I have an enormous amount of respect for the brand. I've always driven a Range Rover, for me they are the epitome of quality and luxury."

"When I first started working with the team I did a lot of research, and created mood boards to show the team my love of timeless and classic design. I looked at yachts, luxury jets and classic cars."

"It's the small detail that makes all the difference. I want everyone who gets into this car to feel special and empowered by its quality and craftsmanship. I like that it feels luxurious but also has quite a classic edge to it as well as a contemporary feel."

Land Rover Design Director Gerry McGovern said, "Working with Victoria we quickly recognized our similar design tastes and ambition for this car. For example at the first meeting, Victoria herself inspired the use of rose gold. She was wearing dark clothes and no jewelry apart from a rose gold, man's watch. I was struck by the juxtaposition of the masculine watch on a very elegant, feminine wrist. We both agreed it was the ideal way to introduce a softer touch to the bold, assertive exterior color scheme."

"Throughout the process we were keen to ensure that the vehicle would appeal equally to both men and women, in fact Victoria always maintained that she wanted her husband David to be proud to drive this car. We fully enjoyed working with Victoria and I am confident this special edition will appeal to discerning luxury consumers globally."

Simon Fuller, whose company XIX Entertainment partners Victoria Beckham, comments, "Victoria has had an incredible start to 2012, she was named Designer Brand of the year. Her fashion business is growing impressively in every market in the world and now here she is in Beijing launching her Special Edition Range Rover Evoque at one of the world's most important car events. Victoria could not be happier pursuing a career that she loves and I am looking forward so much to seeing what the future holds for our business partnership."

Design overview
Quintessential British luxury is a hallmark of both the Land Rover and Victoria Beckham brands. This Special Edition allows that impression to be further heightened through the use of the finest quality materials and craftsmanship, which highlight the already ultra-premium interior ambience of the Evoque.

Complimenting the ultra-modern exterior is an elegant and luxurious interior. The sport design four-seats are finished in a semi-aniline Vintage Tan leather, with a bold 'baseball' stitch detail chosen by Victoria as a tongue-in-cheek reference to her sporting husband David. The same leather is also used to cover the door inserts, arm rests and central storage box lid.

Bespoke luggage completes the holistic design package that is the Range Rover Evoque Special Edition with Victoria Beckham. This four-piece set is based on the designer's own luggage range, using the same high-quality internal structure and clothed in hand stitched black leather. The set comprises two his and her's wheeled suitcases and wash bags, all of which are lined in the same microsuede used for the roof lining, and as a finishing touch the zip pulls are finished in the same matt grey as the exterior.

A beautiful hand stitched leather wallet, with rose-gold detail containing a guide to the exclusive features of the car is co-branded Range Rover Evoque and signed by Victoria Beckham.

The Range Rover Evoque went on sale in the Fall of 2011 and is the recipient of more than 100 international awards thanks to its unique combination of dramatic design underpinned by the brand's core credentials of capability and luxury.

The Range Rover Evoque Special Edition with Victoria Beckham will begin deliveries in October 2012. For details of pricing and to register interest visit: www.landrover.com

About Victoria Beckham
Victoria Beckham is one of the world's most recognized style icons, a highly acclaimed fashion designer with an elegant aesthetic and love of luxury.

After eight sold out seasons of her signature mainline collection, the Victoria Beckham luxury brand encompassing dresses, denim, eye wear and handbags continues to win over even the toughest critics with rave reviews and retail waiting lists.

As one of the most influential women in fashion, Victoria has graced the covers of many international magazines and in 2011 won both accessory designer of the year at the Glamour Woman of the Year awards and the coveted Designer Brand of the year at the British Fashion Awards.

About Jaguar Land Rover North America, LLC
Jaguar Land Rover is a business built around two great British car brands that are designed, engineered and manufactured in the United Kingdom. Jaguar Cars Limited, founded in 1922, is one of the world's premier manufacturers of luxury sedans and sports cars. Since 1948, Land Rover has been manufacturing authentic 4x4s that define "breadth of capability" in their segments.

Headquartered in Mahwah, New Jersey in the United States, Jaguar Land Rover North America, LLC has offices across the USA and Canada and is represented by more than 330 retail outlets. 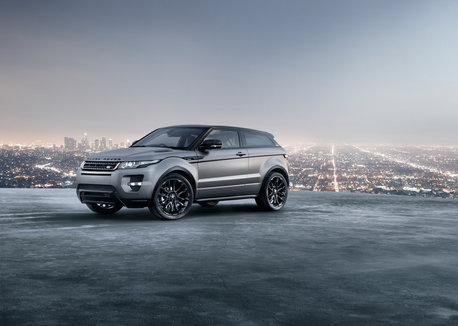