Land Rover hosted an outdoor winter BBQ in North Yorkshire this weekend as part of its spirited #Hibernot campaign, which encourages families and friends to embrace the hidden treasures of winter.

Whitley, 26 January 2015 - Land Rover hosted an outdoor winter BBQ in North Yorkshire this weekend as part of its spirited #Hibernot campaign, which encourages families and friends to embrace the hidden treasures of winter.

Guests were treated to a surprise acoustic set by singer and Strictly Come Dancing star Pixie Lott, who performed a selection of her hit tracks in the cosy, outdoor setting.

Self-proclaimed 'petrol-head' and TV chef James Martin was also keen to join in the fun and prove that, despite the muddy setting, you can get outside and enjoy the best of Britain's majestic landscape, regardless of the weather.

Families feasted on a specially designed winter BBQ menu developed and cooked live by James Martin himself. The James Martin 'Land Rover' burger sat temptingly on the gourmet menu alongside 'Smokey Mutton Subs' with crispy lamb breast, chargrilled pineapple with black pepper, rum and maple syrup and a host of other tasty treats to keep guests warmed and comforted.

James said: "Barbecuing is one of my favourite types of cooking. It's simple, it's easy and it's fresh but people would be silly to think it's only for the summer. As long as you wrap-up warm, you can make some cracking winter dishes on a BBQ! Why not spin the stereotypical Australian beach BBQ on its head and have one in God's own country. Yorkshire, in winter? It's been muddy but a lot of fun!"

To help people make the most of the winter months, Land Rover's #Hibernot website, www.hibernot.co.ukfeatures over 300 recommended activities all over the UK for everyone to enjoy and explore.

Land Rover UK Marketing Director Laura Schwab, says: "Hibernate? At Land Rover we say 'Hiber-not'! We're embracing winter and encouraging people to get outside and enjoy Britain in the colder months. What better way to finish January than with a celebration of the great outdoors?"

Broughton Hall, North Yorkshire was the backdrop to an afternoon of good food, fun for all the family and surprise entertainment. James Martin's delicious offering was accompanied by an atmospheric soundtrack provided by Singer and Strictly Come Dancing star Pixie Lott who serenaded guests with an impromptu acoustic set.

Editor's notes Menus and recipes for delicious BBQ ideas are on the #Hibernot website https://live.landrover.co.uk/hibernot/winter-bbq-guide for winter adventure-seekers to try for themselves.

#Hibernot a fully integrated, socially driven winter programme aimed at celebrating the great British outdoors with the new Discovery Sport. The campaign is designed to inspire and excite consumers in the UK through a series of experiential, social and PR activations and celebrates those Brits who relish the winter months, rather than hibernating inside.

The world's most versatile and capable premium compact SUV, the Discovery Sport, is the first of the new Discovery family. It features 5+2 seating in a footprint no larger than existing 5-seat premium SUVs, as well as Land Rover's class-leading capability. The launch marks another significant milestone in Jaguar Land Rover's product offensive, which will see the company deliver 50 significant product actions over the next five years.

For further information on Land Rover or #Hibernot visit www.uk.media.landrover.com or contact: 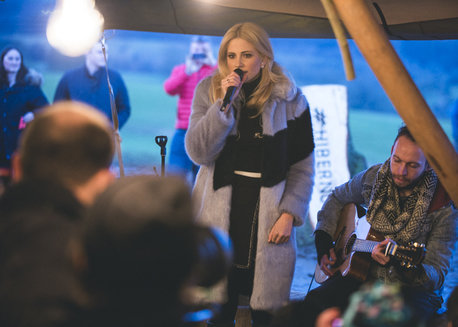