The Range Rover Velar has been judged the most beautifully designed vehicle on the planet, winning the World Car Design of the Year title at the 2018 World Car Awards

The Range Rover Velar is an outstanding, superior SUV. Compelling modernity, eye-catching design, innovative Touch Pro Duo infotainment technology and a clear focus on sustainability - what a combination. This product speaks for itself.
F-TYPE, Evoque, F-PACE and now the Range Rover Velar wins the World Car of the Year design award. This means a lot to us. I feel very honoured and I want to thank all jury members for their trust and support in encouraging the Land Rover team to continue on their unique path.
I also want to thank our Velar team for their passion and commitment, for going the extra mile to move boundaries for extraordinary solutions.

The continued evolution of our design philosophy is driven by a relentless focus on creating highly desirable vehicles our customers will love for life. The Range Rover Velar brings a new dimension of modernity to the Range Rover family with an abundance of innovative technologies, all making this vehicle a joy to drive and be driven in.
We’re honoured that the jury recognised the tireless endeavours of our designers and engineers in delivering a vehicle with compelling design, tailored technology and relevant innovation which come together to create a vehicle of instant desirability.

The luxury SUV overcame the Volvo XC60 and the Lexus LC 500 to take the World Car Design of the Year award, as voted for by the World Car Awards jury, comprising 82 influential motoring journalists from 24 countries.

Velar’s success follows the 2017 double win for the Jaguar F-PACE. Launched last year and named after the codename for the original concept Range Rovers of the late 1960s, the Velar fills the space between the Range Rover Evoque and Range Rover Sport.

It is available with a choice of six powertrains, ranging from the clean and responsive 180PS 2.0-litre Ingenium diesel to the potent 380PS supercharged 3.0-litre V6 petrol engine.

Designed, engineered and manufactured in the UK, the Velar delivers the practicality, connectivity and capability expected from the Range Rover family. With the latest technology and the inclusion of more sustainable materials, this luxury SUV is designed to go Above and Beyond.

The Range Rover Velar, priced from £44,830 in the UK, is available to order now at Land Rover retailers.

You can configure your preferred specification at: www.landrover.co.uk

Now entering their 14th year, the annual World Car Awards are the number one awards program in the world for the fifth consecutive year based on Prime Research’s 2017 media report. The awards were inaugurated in 2003, and officially launched in January 2004, to reflect the reality of the global marketplace, as well as to recognize and reward automotive excellence on an international scale. 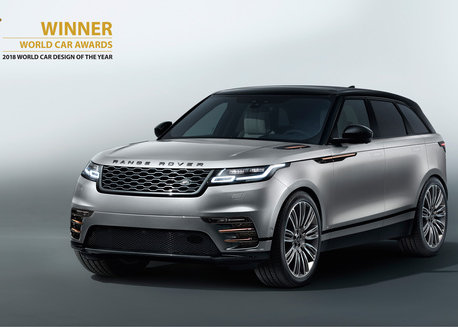 The Range Rover Velar has been judged the most beautifully designed vehicle on the planet, winning the World Car Design of the Year title at the 2018 World Car Awards