As part of Land Rover's three year global initiative of 'Reaching Vulnerable People Around the World', the first pair of cycle response units (CRUs) were handed over to the British Red Cross at the Guy Salmon dealership in Knutsford.

Gaydon, Warwickshire, 25 August 2011 -As part of Land Rover's three year global initiative of 'Reaching Vulnerable People Around the World', the first pair of cycle response units (CRUs) were handed over to the British Red Cross at the Guy Salmon dealership in Knutsford yesterday.

This September will see the bikes rolled out across theUK, as part of a vital new nationwide fleet of 26 cycles for the British Red Cross. They will help strengthen the ability of the Red Cross to respond to emergencies and people in need of assistance.

Developed with 2x2, Land Rover's bicycle manufacturer, the 26 bikes (which will work in pairs) have been custom built and will be fully equipped to save lives. British Red Cross first aiders will be geared up for emergencies and the 13 pairs of CRUs will be able to effectively navigate urban and crowded areas, reaching people faster in times of emergency with life-saving care.

Each CRU is fully equipped with a defibrillator, advanced first aid kit and resuscitation equipment, enabling first-aiders to respond to incidents swiftly.

Colin Green, Managing Director of Land RoverUKsaid: "We are absolutely delighted to be able to contribute to the long term support of the British Red Cross in our home market. By installing defibrillators in both the 30 donated vehicles and in these cycle response units, it will significantly enhance the British Red Cross' ability to treat people at crowded events and areas where vehicle access is limited, whatever the terrain or conditions."

"It's been great seeing the bikes here at Knutsford - knowing they will be helping to save lives right across theUK. By equipping our 2x2 cycles with life-saving equipment means that The British Red Cross is even better prepared for emergencies - especially at the forthcoming Chester races and Tatton Park Triathlon in the north west," added Jason Emanuel, Managing Director of Guy Salmon, Knutsford.

Richard Hankins, Head of Events First Aid for the British Red Cross said: "Land Rover's support for this project has considerably enhanced our capabilities to get to people much faster and to provide that critical care. This could play a defining factor in survival to a variety of medical emergencies, such as cardiac arrest - whereby it can be the difference of saving a life if treatment can be delivered to the patient within the initial minutes of the arrest."

The collaboration between Land RoverUKand the British Red Cross is part of the major global partnership between Land Rover and the International Federation of Red Cross and Red Crescent Societies (IFRC), announced in August 2010. It involves Land Rover supporting national Red Cross societies in 15 countries, with each country adopting a priority programme.

CRU (side view) and CRU mounted on BRC Land Rover 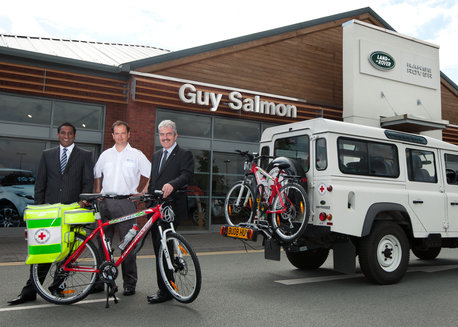