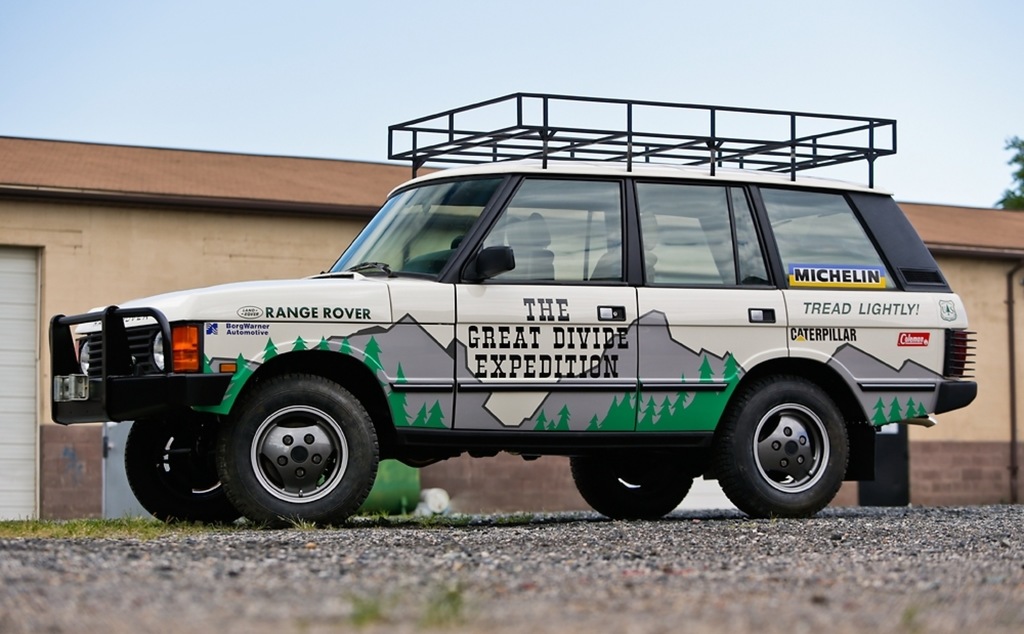 Why did Land Rover decide to build a replica?

In August and September, we will be recreating the original 1989 Great Divide Expedition with customers and media driving stock 2014 Range Rover vehicles along portions of the original Great Divide route in Colorado. We thought it would be fun to build a replica of one of the original expedition vehicles so it could take part in the drive. By auctioning it in partnership with eBay Motors, we’ll raise some money for the Tread Lightly! organization that does great work for promoting responsible off-road driving.

Why not simply restore one of the original Great Divide Expedition Range Rover vehicles?

What is the story behind the vehicle you used?

Bob Burns, Land Rover North America Events Manager, chief driving instructor and passionate Land Rover enthusiast, found a correct-spec 1990 model-year Range Rover out in California more than a year ago. It was in great shape body-wise, but pretty much everything needed restoring. When I’m not working as a Land Rover Certified Technician and Off-Road Driving Instructor, I own a workshop in White Marsh, Maryland. We brought the vehicle here and in February this year started the restoration.

How big a job was it?

It was a huge job. We took the entire vehicle apart down to the last nut and bolt. Every mechanical component was rebuilt, we fitted a re-manufactured 3.9-liter V-8, the whole interior was removed and restored, and we repainted the body in authentic Chamonix White. I had tremendous help from two other Land Rover technicians - Fred Monsees and Sean Gorman - along with many of the key Land Rover component suppliers in the U.S., who tracked down so many hard-to-find parts. Thankfully, Rick Allen, who works at Land Rover Dublin in Ohio and owns one of the original Great Divide Expedition Range Rover vehicles, let us use his car as a template to ensure ours was an absolutely perfect replica.

What were the real challenges with the restoration?

Recreating many of the unique features of the Great Divide Expedition Range Rover was a challenge. We made that vast expedition roof rack from scratch, and though we were lucky enough to track down an original aluminum bumper, it needed major work. Recreating the original graphics was also a challenge. I ended up hand-painting mountain landscapes along the sides, but this was truly a fun project to be involved in. Essentially we were recreating a piece of Land Rover history, and any time you can bring a vehicle back to life is always satisfying.

How much is it going to sell for on eBay?

The charity auction ends August 14 at 9pm EDT and you can bid, or follow it simply by going to http://givingworks.ebay.com/tread-lightly. This is a truly unique, ground-up restored vehicle that has been built to mark the 25th anniversary of the original drive. In addition, the winner will also have the opportunity to take part in September’s commemorative expedition. For any Land Rover enthusiast, it is a dream vehicle.