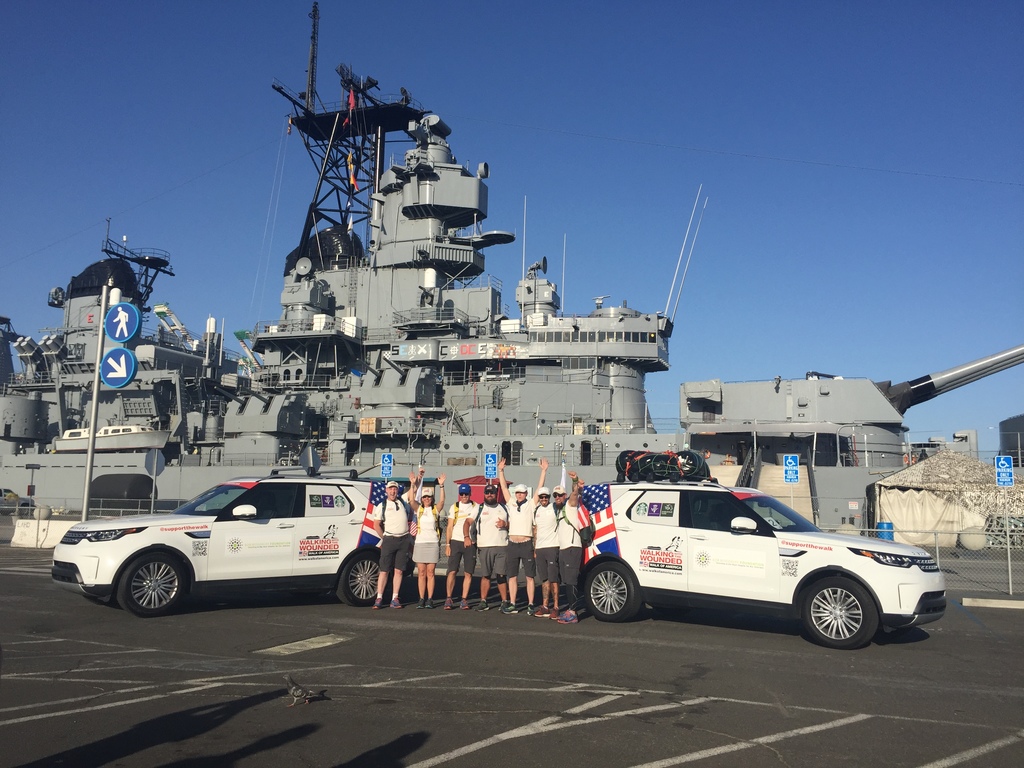 Jaguar Land Rover Partners with Walking With The Wounded

The youngest of 10 siblings and the father of five, Frankie Perez proudly joined the US Army in 2001. The native of San Juan, Puerto Rico was eventually deployed to Iraq, and suffered injuries there in 2005 when the Gunner’s convoy was hit by an IED (Improvised Explosive Device). Perez survived his injuries, but his 10 year battle with Post Traumatic Stress Disorder (PTSD) would almost take his life in 2008 when he attempted suicide and would be incubated for 30 hours.

"My PTSD is a dark, dark demon,” says Perez. “And I have fought with him many times. I know him well.”

Today, Perez is in a much better place. He’s currently walking 1,000 miles across the United States as part of the Walk Of America expedition team. “Statistics say that in the US alone we lose 22 veterans a day just to suicide,” says Perez. “Walking every step of the way with my US and UK allied wounded teammates will be a unique experience and I am honored to be taking part to represent so many thousands of other veterans who need the support of organizations such as Walking With The Wounded, The Bob Woodruff Foundation and The Wounded Warrior Project.”

Perez and his five teammates, two Americans and three British soldiers, also wounded in combat, have all suffered with their mental health as a result of their service. The walk is raising the profile of the invisible wounds of war, including depression, stress, anxiety, Traumatic Brain Injury (TBI) and Post Traumatic Stress Disorder (PTSD).. Although these wounds cannot been seen, they are just as important and affecting as physical injuries. With support from Expedition Patron, Prince Harry, their 14-week journey began on the sandy beaches of Los Angeles on June 2nd with the help of driving partner Jaguar Land Rover, which has supplied a fleet of full-sized, three-row, seven-seat Land Rover Discovery SUV vehicles. The new fifth-generation Discovery, with its new technology features, enhancements to its suite of driver assistance systems, expanded powertrain availability and new design options, is the perfect Land Rover for the task. Embodying the Land Rover brand’s drive to go Above and Beyond, the Discovery vehicle’s unique ability to traverse a variety of surfaces, terrains and weather conditions will ensure their destinations are reached.

The Walk Of America will finish in the hustle and bustle of New York City on September 6th. Along the way, the expedition team will stride past America's most iconic cities, landmarks and communities, including Texas, Colorado, Mt. Rushmore, Kansas City, Chicago and Nashville. At each location they are engaging with media, celebrities, donors and others eager to show support for those who have served.

The Walk Of America is Walking With The Wounded’s fifth expedition, the first being tothe North Pole in 2011. The privately funded expeditions also enjoyed the support and participation of Prince Harry and Jaguar Land Rover in the Walk Of Britain in 2015. Jaguar Land Rover has also been a presenting sponsor of the Invictus Games since its inception in 2014. Created by Prince Harry, the international sporting event for wounded, injured and sick servicemen and women, both serving and veterans, takes place every two years. The next Invictus Games will be held in Sydney in October. Jaguar Land Rover is very proud to be supporting the Walk Of America expedition this year and wish the team the best of luck on their journey across the States. You can find out more, follow the team and donate here at www.walkofamerica.com