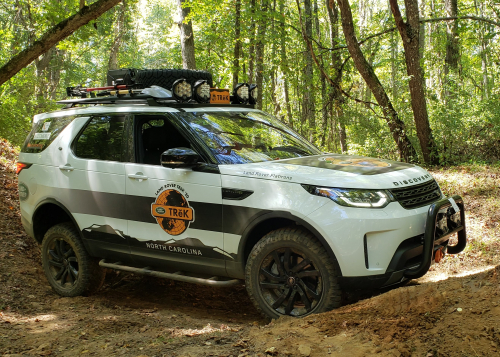 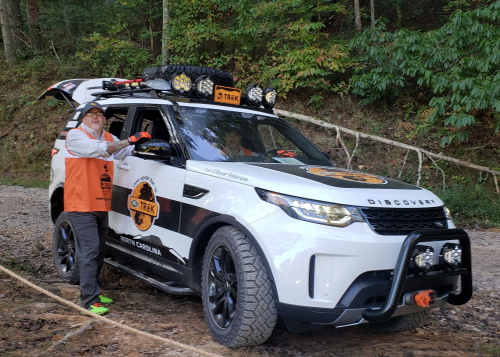 Held this year in conjunction with the launch of the highly anticipated New Land Rover Defender, Land Rover TReK 2020 was a competition event for Land Rover retailer staff. It’s designed to educate and challenge sales, service and technician personnel with a variety of first-hand off-road experiences that test their considerable off-road driving, navigation and team collaboration skills.

It has been over a month since Mark Manniko competed in Land Rover TReK 2020 on behalf of JLR Flatirons, Colorado’s second-largest Land Rover retailer. “I’m still a little sore,” jokes the 50-year old Sales Guide.

Manniko has been with Jaguar Land Rover Flatirons for 20 years, which is also where he met his wife Marcy, who competed in Land Rover TReK back in 1997. Today the couple has two teenagers, son Evan and daughter Mia, and the family enjoys camping, motorcycling and off-roading on the weekends.

Although this was Manniko’s first Land Rover TReK experience, it wasn’t his first off-road competition. He’s been competing off-road since he was 10 years old and he’s a nine-time Colorado state off-road motorcycle champion. He still competes often with Evan in Observed Trials events, which involve specially prepared motorcycles ridden over impossibly large obstacles including boulders and fallen trees. MotoTrials is a very specialized discipline and it’s one of the oldest and most unusual forms of motorcycle competition. Speed is not a factor, instead riders assess penalty points if they put a foot down while navigating the extreme terrain. The rider with the lowest overall score at the end of the day wins.

Despite his extensive off-road experience, Manniko was still hesitant to take on the challenge of TReK, which he knew would be physically challenging and put his problem solving skills to the test. “I just couldn't let my wife have one up on me,” he says with a smile. “In all seriousness, I decided to do it because she felt like it really was meaningful and worthwhile in her journey within Land Rover because it does embrace what the company at its core is all about. Go anywhere. Do anything. Adventures. Fun. Capability.”

“I bleed Land Rover green,” adds Manniko. “I’ve been with the company and involved with the product for two decades, and I’ve owned bunches of Land Rover vehicles. I love driving them off road.”

Land Rover TReK 2020 pitted 53 three-person teams, each representing the various sales regions for Land Rover across the U.S. and Canada, against each other in head to head team and group challenges. The teams competed in 53 identically customized 2020 Land Rover Discovery SUVs for the preliminary qualifying trials at the Land Rover Experience Center at the Biltmore Estate in Asheville, North Carolina. The winning teams from each wave are headed to the TReK Finals in January 2020 in Palm Springs, California, where they will compete with the new 2020 Land Rover Defender.

Although Manniko and the team from JLR Flatiron finished second, he enjoyed the experience greatly. “I would absolutely do it again,” he says. “It was more fun than I thought it was going to be and it was challenging but possible. The difficulty level seemed appropriate.”

Jason Fune is also the second member of his family to take on the challenge of Land Rover TReK. His father Carroll Bundy competed in the competition back in 1999 when he was Technician at Land Rover Alexandria in Virginia. Today, Fune is the Parts Manager for the retailer and he and his teammates, General Manager Bill Colgate and Technician Jason Lanciki, not only enjoyed competing in Land Rover TReK 2020, the team was a winner at the Qualifying Trials and will be moving onto the Land Rover TReK 2020 Finals.

“When my father did TReK all he could talk about was the experience,” says Fune. “All he could talk about was how great it was, and I really wanted to share that same experience. Unfortunately my father passed away a couple of years ago, and when I told my mom I was doing it she could hear the emotion in my voice just talking about it. My brother was like ‘oh my God that’s amazing that you can do that’. It’s a big deal for my family.”

Married since 2010 to his wife Maggie, Fune is the father of two young children, Andy and Lana. His vast passions include art, motorcycling, off-road driving and sports, including football, basketball and routing for the World Series-bound Washington Nationals. He also enjoys riding his high-performance sport bike on the weekends. “I’m very competitive,” says the 39-year old.

Fune’s artistic talents are also extensive. His body of work, which includes unique pumpkin sculpting inspired by comic books, as well as airbrushing, can be enjoyed on his Instagram page. “I’m the artist on the team,” he adds proudly. “But I don’t do it for money, I just do it because I like doing it.”

The young artist enjoyed Land Rover TReK 2020 so much, he wishes everyone could experience it. “From the team building to the intense competition and the incredible off-roading, it was just so much fun,” he says. “I’m so proud of how well we worked as a team. I can’t wait for the finals in the new Land Rover Defender. I can’t wait to drive it. The whole thing almost seems like a dream.”