Today, Land Rover North America announced a limited production Defender Trophy Edition, with an opportunity to join an exclusive adventure competition held at the Land Rover Experience Center in Manchester, Vermont.  Following the success of the 2021 competition, Defender Trophy owners will have the ability to take part in the expedition style competition included with purchase(3).

“The Defender Trophy Edition continues to embrace the spirit of adventure while honoring Land Rover’s rich and iconic heritage,” said Joe Eberhardt, President and CEO, Jaguar Land Rover North America. “We look forward to welcoming our Defender Trophy Edition customers to put these vehicles to the test at the exclusive adventure competition, while experiencing the breadth of capabilities inherent to the Defender.”

With 250 Defender Trophy Edition vehicles sold exclusively in the U.S. and Canada (220 US / 30 Canada), each will come with an opportunity for a two-person entry to a one-day off-road adventure in the Defender Trophy Competition. Up to 90 teams (six waves of 15 teams maximum on a first come, first served basis) from the U.S. and Canada will compete at the Land Rover Experience Center in Manchester, V.T., starting from October 8, 2022.

The overall winning team, as determined by a judging panel, will go on to take part in the Classic Land Rover Trophy Competition in the stunning and challenging terrain in the U.K, due to take place in Spring 2023.

Competitors will face a number of on- and off-road challenges, including physical and team-building obstacles. In addition, expert one-on-one coaching will be provided as part of the adventure, giving customers a unique opportunity to develop extreme driving techniques and skills in their own vehicle before putting their training to the test.

The Defender Trophy Edition will be available this August, with an MSRP of $95,000(2). It can be purchased at certain Land Rover retailers in the U.S. and Canada. To learn more visit, landroverusa.com/vehicles/defender/trophy-edition.

1Available as a retailer installed optional accessory. Supply of vehicle winch is very limited and subject to availability. Before using the winch, please consult the owner's manual or your local authorized Land Rover Retailer for more details.

3 A maximum of 90 team spots are available on a first come, first served basis with a purchase of a Defender Trophy Edition vehicle and registration deadline is September 27, 2022. Please see your participating authorized Land Rover Retailer for complete Terms and Conditions or visit https://www.landroverusa.com/vehicles/defender/trophy-edition-terms-and-conditions.html

Founded in 1948, Land Rover designs and engineers its vehicles in the United Kingdom. For over 70 years the brand has built a reputation for providing its clientele with some of the most luxurious and capable vehicles in the world; whether driving through the heart of the city or traversing the countryside on- and off-road. Today's Land Rover lineup includes the Defender; Discovery and Discovery Sport; Range Rover, Range Rover Sport, Range Rover Velar and Range Rover Evoque. Land Rover is fully engaged with sustainability initiatives and social concerns with continuous involvement in environmental and community programs. For more information, visit the official Land Rover website at www.landroverusa.com.

Our current model range embraces fully electric and mild-hybrid vehicles, as well as the latest gasoline engines. Jaguar and Land Rover vehicles are in demand around the world and in Fiscal 2020/21 we sold 439,588 vehicles in 127 countries. Land Rover is the global leader of luxury SUVs through its three families of Range Rover, Discovery and Defender. 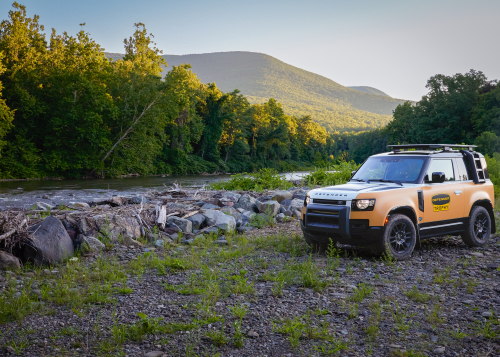