Land Rover today announced an off-road driving skills competition for its North American retailers, Land Rover TReK 2020, to be held this year during the launch of the highly anticipated New Land Rover Defender.

(Mahwah, N.J.) – September 23, 2019 – Land Rover today announced an off-road driving skills competition for its North American retailers, Land Rover TReK 2020, to be held this year during the launch of the highly anticipated New Land Rover Defender. With the launch of the New Defender, the Land Rover product lineup will expand to three families of highly-capable vehicles: Range Rover, Discovery and Defender.

Land Rover TReK 2020 is a two-day competition, comprised of a preliminary qualifying event and final event, for Land Rover retailer staff designed to educate and challenge sales, service and technician personnel with a variety of first-hand off-road experiences and challenges. The competition combines skills testing in off-road driving, navigation and team collaboration to test some of the best off-road driving experts across the U.S. and Canada.

This year’s competition will pit 53 three-person teams – each representing the various sales regions for Land Rover across the U.S. and Canada – against each other in head to head team and group challenges. The teams will compete in a series of 53 identically customized 2020 Land Rover Discovery SUVs for the preliminary qualifying trials taking place at the Land Rover Experience Center at the Biltmore Estate in Asheville, North Carolina this week.

The winning team from each wave of competition will then head to the TReK Finals held in January 2020 in Palm Springs, California, where they will compete with the New 2020 Land Rover Defender.

“With the return of the Land Rover Defender in 2020, we are thrilled to bring back the TReK competition to put our vehicles – and the skills of our retailers –to the ultimate test,” said Kim McCullough, Vice President of Marketing, Jaguar Land Rover North America. “This competition is a great way to engage our retailer network, push their off-road driving skills to the max and have some fun.”

The reintroduction of the TReK competition is timed ahead of the return of the Defender family to the Land Rover brand. The previous generation model of the Defender ceased global production in 2016 and has been absent from the U.S. market for more than 20 years; last being offered for the 1997 model year.

Founded in 1948, Land Rover designs, engineers, and manufactures its vehicles in the United Kingdom. For almost 70 years the brand has built a reputation for providing its clientele with some of the most luxurious and capable vehicles in the world; whether driving through the heart of the city or traversing the countryside on- and off-road. Today's Land Rover lineup includes the Discovery and Discovery Sport; Range Rover, Range Rover Sport, Range Rover Velar and Range Rover Evoque. Land Rover is fully engaged with sustainability initiatives and social concerns with continuous involvement in environmental and community programs. For more information, visit the official Land Rover website at www.landroverusa.com. 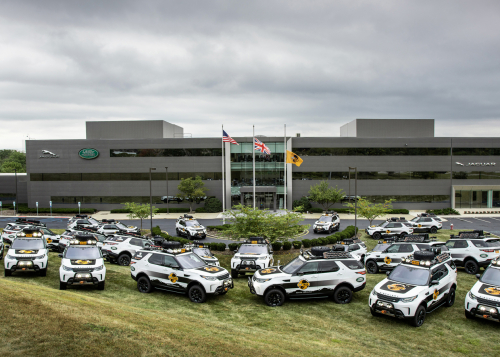